Set after World War II as Japanese Americans return to the West Coast, NO-NO BOY follows Ichiro Yamada, who struggles to reconnect with the Seattle community, after taking a bold stance on questions of allegiance. NO-NO BOY received critical acclaimed when it was presented in 2014 by Pan Asian Rep, and returned to NYC in 2016 prior to embarking on a national tour where the play received rave reviews in Washington, D.C.

The limited run of NO-NO BOY is running in tandem with the Day of Remembrance (DOR), a day commemorating the Japanese American internment during World War II.  Events in numerous U.S. States are held on or near February 19, the day in 1942 that Executive Order 9066 was signed, requiring internment of all Americans of Japanese ancestry. 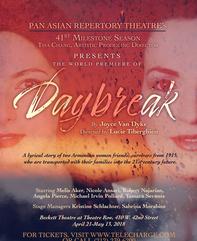 Daybreak is a lyrical story of two Armenian women friends, survivors from 1915, who are transported with their families into the 21st century.  Set in three time periods, the play is inspired by the true stories of Victoria  and Varter, survivors driven from their homeland of Armenia, and using memory, dreams, and music, carries the story of these women through three generations to celebrate love, beauty and the endurance of the human spirit.

A ghost story, The Brothers Paranormal by Prince Gomolvilas, directed by Jeff Liu, follows two Thai brothers who investigate paranormal activities in the Midwest. When the siblings visit the home of an African-American couple, who have been displaced by Hurricane Katrina, their notions of reality, and spiritual beliefs are pushed to a breaking point. Pan Asian Rep explores—for the first time—Thai-American and African-American intersection, spiritual displacement, and the taboo subject of mental health. May is recognized asAsian Pacific American Heritage Month and Mental Health Awareness Month